On May 11, 1925, the first chapter of Omega in the State of Florida was established in Jacksonville, by Brother W. W. Blocker in cooperation with Brothers W. A. Busch, G .H. Leggett, R. L. Brown and J. A. Thomas. These four Neophytes were initiated at that time and so enthusiastic were the new members in their desire to see the 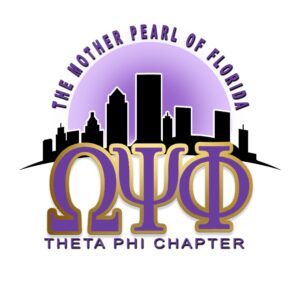 Chapter take its place in the affairs of the community that a second initiation was held on May 25, 1925. The charter recently issued to the chapter and designated it “Theta Phi” was heartily received. The program of the Chapter which is based on the national
program of the fraternity is designed to encourage the study of Negro history and achievement and to develop race pride and self-respect among the member of our group in the community. To this end, the members of the Theta Phi Chapter have begun an exhaustive study of the Negroes’ contribution to the arts, sciences, and other fields of human endeavor. At each of the meeting of the Chapter interesting discussion of these investigations are enjoyed by the members and
plans have been formulated for beginning the study of Negro history in public schools.

The members of the chapter in the city prior to the formation of the Theta Phi Chapter have for
the past two years observed in some form fashion the Memorial Day in honor of our late Brother Chas Young. The Chapter will continue to observe this date and will endeavor to reach more people with the life of achievements of such a distinguished member of our group. Theta Phi Chapter, coming at a time when the whole State of Florida is passing through a remarkable period of growth and expansion has a large place to fill in the State of Florida. Requests are coming from various sections of the State for information concerning our grate Fraternity. In spreading the ideals of Omega, and in holding up the finer things in the progress and life of our people, Omega can do much.

The membership of Theta Phi Chapter represents some of the most respective men in the life of the city of Jacksonville. A glance at the Chapter’s roster will reveal the fact that these latest members of Omega are filled with the spirit that every Omega man possesses: a spirit that knows no defeat.  Brother Blocker who was elected the first Basileus of the chapter is rapidly placing the Atlanta Life Insurance Company in the top row among many insurance companies operating in the state. Brother F. M. Morton Keeper of Records is rated as one of the most efficient instructors in the local high school; Brother I. E. Williams Keeper of Seals, is one of the most successful younger physicians, and likewise one of the most enthusiastic of the Theta Phi membership; Brother D. W. Perkins Keeper of Peace, is one of the most prominent attorneys of Jacksonville, and has shown a deep interest in the development of Theta Phi Chapter; Brother J. E. Ford and Brother E. J. Gregg, ministers of two of the most prominent churches in the city have exhibited much enthusiasm in the program of the chapter and without a doubt are the outstanding representatives of their profession in the city of Jacksonville. Likewise, the other members of the chapter are living examples of Omega’s cardinal principles and within a few months, Theta Phi Chapter will be a close competitor for the honor of being one of Omega’s liveliest and most energetic chapters.